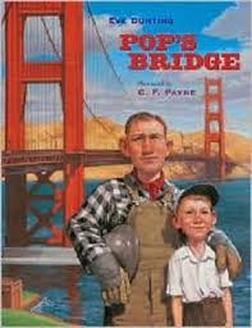 by Eve Bunting and illustrated by C. F. Payne
Pop's Bridge
The Golden Gate Bridge. The impossible bridge, some call it. They say it can't be built.  But Robert's father is building it. He's a skywalker--a brave, high-climbing ironworker. Robert is convinced his pop has the most important job on the crew . . . until a frightening event makes him see that it takes an entire team to accomplish the impossible.

When it was completed in 1937, San Francisco's Golden Gate Bridge was hailed as an international marvel. Eve Bunting's riveting story salutes the ingenuity and courage of every person who helped raise this majestic American icon.


I found this great link to video of the Golden Gate Bridge being built.


Golden Gate Bridge construction
Blue words are links to videos or games to help develop understanding.  All files have been looked at prior to uploading, however please review them before allowing your child to use them in case they have been changed.

Spelling and Vocabulary
Spelling:  Long O spelled oa, ow
Vocabulary Strategies: Base Words and Suffixes with -s, -es, -ed, -ing
Grammar:  Common and proper nouns
I found a new file format that has the spelling and vocabulary words on one page.